Marine Safety division patrols the Great Lakes as well as the inlands lakes in Mackinac County. Marine Safety patrol are partially funded through grants from the Michigan DNR. Grant money is derived from boat registration fees. Every time a boat is registered a portion of that money goes to the Mackinac County Sheriff’s Office to fund the patrol that keep the boating public safe.

There are about 300 miles of snowmobile trails in Mackinac County. These trails are patrolled by deputies using a Michigan DNR grant to fund 85% of the costs involved with the patrol. These funds come from registration fees of snowmobiles. Mackinac County currently has 5 snowmobiles stationed throughout the county to respond to emergencies as well as routine patrol. 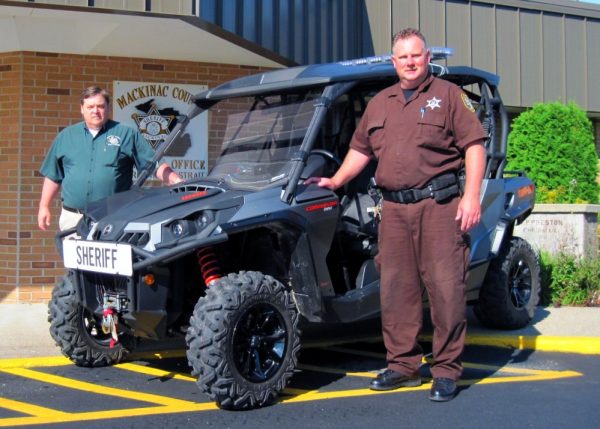 The ORV trails are patrol by deputies using a Michigan DNR grant to fund 100% of the costs involved with the patrol. These funds come from registration fees of ORVs. Mackinac County currently has 4 ORVs stationed throughout the county to respond to emergencies as well as routine patrol. Yes, you may ride your ORV on Mackinac County roads with certain restrictions. You may only ride on the county roads to access an approved ORV area.

For the ordinance allowing ORVs on the road and rules in Mackinac County click here. By Karen Gould
2006 Reprint from The St.Ignace News
Mackinac County Sheriff Scott A. Strait (right)shows new  off road  and snowmobile vehicles acquired with the help of state and federal grants. Tools used by Mackinac County Sheriff’s Office law enforcement team include online fingerprinting, computers, video surveillance, metal detectors, all terrain vehicles, and snowmobiles.When Mackinac County was established in 1818, this equipment, and the names for it, didn’t exist. Now, this technology is a part of the everyday gear used by Sheriff Scott Strait and his deputies as they patrol 651 miles of county roads covering more than 1,000 square miles.

A budget of $1.8 million supports the operation of the sheriff’s office, which includes vehicle maintenance and fuel, jail costs, wages, employee benefits, and training. In the last year, the Sheriff also received more than $194,000 in grants. Federal grants were used to purchase metal detectors for the court house, a video monitoring system for the jail and courthouse grounds, two snowmobiles, two all-terrain vehicles, and tactical body armor vests. State grants provided funding for marine safety and off-road vehicle and snowmobile programs. A Community Corrections grant supported tether operations and community service work. Emergency trail locators for snowmobile trails were funded by a grant from the Sault Ste. Marie Tribe of Chippewa Indians. “We’re upgrading technology and security and the cost to taxpayers is minimal,” said Sheriff Strait. In addition, funds from liquor licensing are used for overtime work, specifically to look for drunk drivers.

The Sheriff’s Office has seven road patrol deputies, one seasonal deputy for Bois Blanc Island, and three part-time deputies, who are a part of the recreational vehicle patrol that includes marine, snowmobile, and off-road vehicle operations. The Sheriff’s Office also has twelve full-time and two part-time corrections deputies and two part-time community corrections deputies who work with the tether program and community service.

The jail also employs two cooks. By last year, all Mackinac County corrections deputies were certified by the Michigan Department of Corrections by completing 160 hours of training. During a county commission meeting in January, and after one year on the job, Sheriff Strait, who has spent the last 25 years in law enforcement, presented commissioners with his first annual report. He was elected to the four-year position in November 2004, following the retirement of Larry Leveille after 20 years at the post. Sheriff Strait has a bachelor of science degree in criminal justice from Lake State University and a master’s degree in public administration from Northern Michigan University in Marquette. His report showed that Sheriff Strait and his deputies have spent the last 12 months upgrading the jail, reduced the county’s medical costs for inmates, replaced patrol cars, and responded to 431 criminal incidents under the road patrol program, which was 90 more cases than in 2004.

The sheriff’s office also has seen an increase in inmates, averaging 20 a day, compared to 18 inmates a day in 2004. “Two people more a day in the grand scheme of things doesn’t seem like a lot,” said Sheriff Strait, “but when you’re only dealing with 28 available beds, that’s a lot.” An appeal that Sheriff Strait made to Mackinac County Commissioners during the 2006 budget process last fall to add more staff members for the jail was turned down, but county officials said they may reconsider the staffing shortfall this year. Sheriff Strait attributes some of the increase in inmates to better surveillance technology at area businesses and better technology and training for deputies at all agencies that use the jail.

Other agencies that use the county jail include the Michigan State Police, the Sault Ste. Marie Tribe of Chippewa Indians police, and Mackinac Island and St. Ignace city police. Crime also has been on the rise in the area, with 484 inmates booked into the jail, up from 393 the year before, said Sheriff Strait. “We’re seeing an increase in cocaine use, and I know we’re seeing an increase in prescription drug offenses,” he noted. Theft of prescription drugs and falsified prescriptions are becoming more common, he noted, and as urban areas clamp down on such crimes, the offenders move out of the cities to more rural areas. This could be seen a few years ago as city gangs spread to the suburbs, he said. “Criminals tend to go to where the heat is less, and that’s why we’re seeing more and more drugs in northern Michigan,” he noted. In a plan last year to put more of the burden of incarceration back on the offender, the Mackinac County Sheriff’s Department became more aggressive in making inmates pay for their housing and the department sought to curtail abuses of the medical care offered at the county jail. “We’re thinking about crime differently now,” said Sheriff Strait. “We’re making individuals responsible for their actions.”

Though the county has required inmates to pay for their housing, the office established a new incentive program to encourage payment. The county charges inmates for lodging by the day and now offers a discount rate if they pay before they leave the jail. The discount rate program is considered a success, with more inmates paying in a timely manner, said Sheriff Strait. The Sheriff has contracted with Correctional Health Car Services, a health agency that provides an on-site nurse to the jail three days a week to help eliminate trips to a doctor’s office. With the county responsible for inmate medications while they are lodged in the jail, the nurse screens the prescriptions to determine if a generic drug can take the place of a brand name medication. The nurse works with the patient’s doctor to determine whether non-critical medication use can be postponed while the patient is incarcerated, to help reduce county costs, he explained. The nurse also provides health screenings, previously performed by a doctor, which are mandated by the Michigan Department of Corrections for inmates in jail longer than 14 days.

The sheriff’s office has signed up for a new program at no cost to the county to gain access to crash statistics for the county and the sheriff uses the information as a tool to help identify where and when road patrols can be most effective. This year, Sheriff Strait will continue to seek grants and will focus on training and education for both deputies and students. “I think it is important to be involved with snowmobile safety, off-road vehicle safety, and marine safety, and to be involved with patrols in those areas,” he said.

Training for officers this year will include defensive tactics, driving instruction, and emergency driving instruction. Sheriff Strait already has sent one deputy to train to become a defensive tactic instructor and now he plans to send another deputy to train as a firearms instructor. Having on-site instructors will help ensure all department personnel are trained, he explained. “We have to be very diverse in our abilities in law enforcement,” he added. He also would like to get all sixth grade students in the county trained in marine, snowmobile, and off-road vehicle safety. The classes offered by the department can be taken by students at any age, though the student does not get a permit to operate the vehicle until reaching 12 years old. “We’re going to work as hard as we possibly can to make sure Mackinac County stays a great place to live,” he said.

Article courtesy of The St.Ignace News